I thought that today I would wax poetic about my favorite season and its pumpkin parades, fall festivals and harvest moon celebrations. But frankly, my enjoyment of all things autumn is suddenly being tempered by an intermittent stress. The holidays are almost here -- yay! The holidays are almost here --what? Gulp. This next week or so leading up to Halloween gives me that sudden panicked surge; like the buzzer goes off and the holiday bullride kicks off. I'm trapped flailing in the bucking chute, waiting for the holiday cowboy to corral me until one of us collapses in the next two months. Christmas cards anyone? I thought that I had blogged that out of my system for good but no. 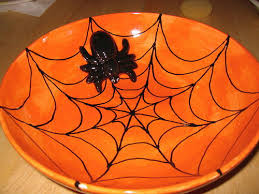 On top of that, wiith the kids getting older, I felt greater than usual pressure to deck the Halloween halls. Weeks ago I went on an expedition in my hell-hole of an old-house basement, seeking the special orange and black plastic bin that stores all autumnal accoutrements. Nowhere to be found. Granted, I spent only 5 minutes down there, perched at the bottom step, calling its name, in hopes that said bin would present itself. I couldn't actually move anything down there because that might disturb...other things that could be taking up residence. Still too traumatized by last year’s Possum-palooza to say much more than that. It never occured to me that if a plastic bin did wander over to me of its own accord that I might actually soil myself.

Anyhow, I did manage to ferret, er..bad choice of words…. to kick a few boxes around but never hit orange and black paydirt. Sure, I found other stuff-- that tower of boxes brimming with Santa paraphernalia taunted me. I was sure I could hear the shimmery, tinsel-dripping mound teeter towards me and hiss,“Finished your Christmas shopping yet?” OK, so maybe I was just getting lightheaded from some October mold -- the air down there can be a little stuffy. And did I mention that our basement is a hell-hole? Seriously, it's just two steps away from Silence of the Lambs. And it's only two steps away because it's not that big -- nothing's going to be able to chase you down there. Oh wait, flashes of Possum-palooza....let's just move on.

So I can't find the box and I hotfoot it upstairs. But luckily in a binge of upstairs fall cleaning, I did find plenty of seasonal linens and knick knacks that never made it back to the bin. That and some fresh pumpkins and pinecones we found at the park should do the trick, right? It's been a few weeks and I'm getting a little compulsive with the pumpkins. They’re multiplying like Tribbles all over the first floor of the house. Should be good, right? But every time I arrange one of my pressed leaf, pumpkin, pine cone tableaus, I think "ohh, the fat pumpkin candle would be so cute here." or "I wish I could find that little spider candy dish. All I can see is what's not there -- like the missing man formation in an airshow. But when should I give up the ghost? We're getting down to the wire here --should I go back in, head down into the dank and stage a rescue. No Bin Left Behind! I know I can find those adorable purple and acid green "boo" placemats. Does it really matter or have I just gone off my gourd? Post a comment and let us know how you make your home boo-tiful for trick or treating.

Thanksgiving is nearly here and there are so many things to give thanks for. Like...

I thought that today I would wax poetic about my favorite season...